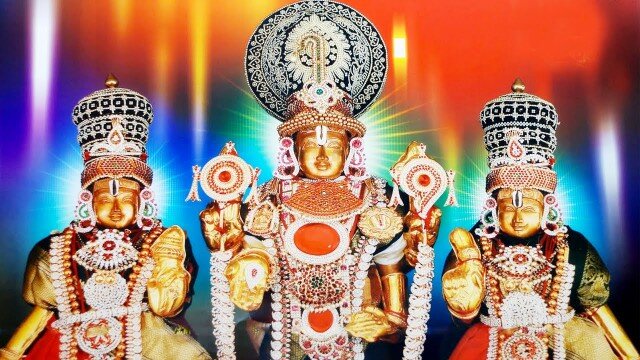 Veṅkaṭēśvara (Telugu: వెంకటేశ్వరుడు, Tamil: வெங்கடேஸ்வரர், Kannada:Sanskrit: वेंकटेश्वरः) also known as Govindā, Śrinivasā, Bālāji, Veṅkaṭā, Vasudevā, and Veṅkaṭācalapati, is a form of the Hindu god Vishnu. According to the Hindu scriptures, Vishnu out of love towards his devotees, incarnated as the supreme form of Venkateswara. Venkateswara’s most prominent shrine is the Tirumala Venkateswara Temple located in Tirupathi in the Chittoor district of Andhra Pradesh in Southern India.
The temple is located upon a range of seven hills representing the seven heads of Adisesha, thus earning the name Seshachalam. The seven peaks are called Seshadri, Neeladri, Garudadri, Anjanadri, Vrushabhadri, Narayanadri and Venkatadri. The temple is on Venkatadri (also known as Venkatachala or Venkata Hill) the seventh peak and is also known as the “Temple of Seven Hills”, and the abode of the presiding deity. The temple lies on the southern banks of Sri Swami Pushkarini, a holy water tank. The temple complex comprises a traditional temple building, with a number of modern queue and pilgrim lodging sites. The temple is amongst the richest and the most visited holy place in the world. It is important to look at the significance of this auspicious day from the spiritual angle.
The demon Muran stands for the Rajasic and Tamasic qualities in people, attributed to lust, passion, inertia, arrogance etc. When one conquers these tendencies, one attains the purity of mind, Satva, indispensable for attaining of moksha, the liberation or realization of the self.
For realizing the self as pure awareness, purity of mind is required. Fasting helps to keep at bay tendencies which could be triggered by intake of certain foods. Keeping vigil in the night is symbolic of awareness, or being watchful of the contents of the mind. When the mind is looked at, it becomes still. To abide in the stillness is to attain freedom or peace, acquired through merging of the mind with the self. This is symbolic of the mind automatically being absorbed at the sight of Vishnu after the arduous fast and vigil.
The belief that rice is prohibited, because Muran dwells in it, symbolically signifies that the eating of rice makes one feel heavy and hampers the vigil. This signifies that entertaining negative tendencies could hamper one’s progress towards awareness or consciousness.