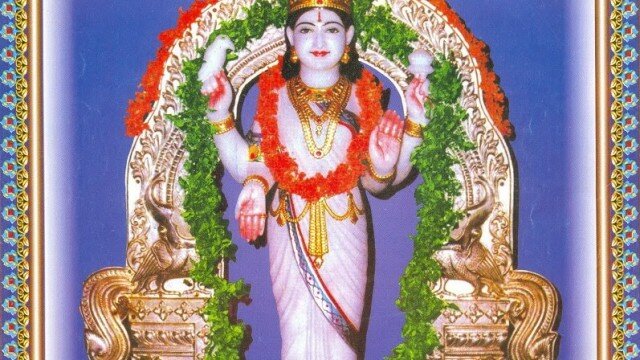 THE STORY OF GODDESS VASAVI KANYAKAPARAMESWARI
PENUGONDA, the abode of VASAVI, is situated on the banks of the GAUTAMI RIVER which
was one of the seven tributaries of the Sacred Godavari and it is the place where GREAT
SAINTS performed YAGNA and penance. It is here the great saint Pulasthya was successful in
achieving the simultaneous visual manifestation of the three deities, Brahma, Vishnu and
Maheswara. Penugonda is also the place where God KUMARASWAMY (Skanda) performed
penance and Guru Bhaskaracharya envisioned the manifestation of Brahma. Later on,
Penugonda become the abode of LORD LAKSHMINARAYANA who went on to be known as
KONAKOMALA JANARDHANA and PARVATHI PARAMESWARA who went on to become
GOWRI NAGARESWARA. PENUGONDA, LOCATED IN WEST GODAVARI DIST OF ANDHRA
PRADESH.

The Vysya community consisted of 714 Gotrajas who lived happily in Penugonda Kingdom under
the able rule of King Kusuma Shresti and Queen Kusumamba. King Kusuma Shresti who was
16th in the line of kings who succeeded SAMADHIMUNI was childless. As per Guru
Bhaskaracharya’s advice they performed ‘PUTRAKAMESTI YAGNA’
Goddess PARASHAKTHI appeared from the
HOMAKUNDAM and blessed the couple with
payasam. Kusumamba consumed the payasam with
devotion and on VAISHAKA SHUDDHA DASHIMI day,
she gave birth to twins a boy,named Virupaksha who was an incarnation of God
Nandikeswara and Vasavi, an incarnation of
Goddess ADIPARASHAKTI.

Virupaksha attained proficiency in Dharmashastra, politics and martial
arts. Vasavi was taught Fine Arts and Music. From her
childhood, she was an ardent devotee of Lord Shiva.
She was a teenage girl of exceptional beauty. She decided to dedicate her life to Lord Shiva and remain
unmarried as Gowrabalika.

King Kusumashresti was a tributary King to Emperor Vishnuvardhana who visited Penugonda.
The Emperor received a rousing welcome by the King Kusuma Shresti and the people of Penugonda
looked at him with awe and reverence.

Vishnuvardhana was captivated by the astounding beauty and glamour of Vasavi
and decided to marry her at any cost. His desire was like a death blow to Kusuma Shresti.
King Kusumashresti called a meeting of the elders of 714 Gotra and discussed the matter in detail.

Under the guidance of Guru Bhaskaracharya, they all decided to give importance to the views of
Vasavi. Royal couple, Guru Bhaskaracharya, Vasavi and Virupaksha had a secret meeting. Vasavi at this
stage told that she wanted to uphold the dignity and honour of womanhood and was born with a
purpose to preach non-violence (Ahimsadharma) to the world. She exhibited her original form of
Adiparashakti and vowed that she would remain a virgin.

On hearing that Vasavi had declined to marry him,Vishnuvardhana deiced to marry her even by waging a war
on Penugonda. In order to prevent bloodshed and to uphold the dignity and honour of womanhood, Vasavi
decided to end her AVATAR by offering herself to the God
of fire — AGNI.

Out of the 714 Gotrajas, 102 Gotrajas supported her view and decided to enter the sacred fire alongwith her. Fearing
persecution from Vishnuvardhana, the remaining 612 Gotrajas ran away from Penugonda to save their lives.
Malhara, a great sculptor built 103 Homakundas for the sacred occasion.
On MAGHA SUDDHA BIDIGE day,

Vasavi entered the Sacred Fire along with the 102 Gotraja
Vasavi emerged from the sacred fire as
‘KANYAKAPARAMEWARI’, and displayed
her original form of ‘ADIPARASHAKTHI’ with
eighteen hands – ASTA DASA BHUJA and
preached Universal and Social Religiousness,
Spirituality, Love, Sacrifice and Non-Violence
and laid the foundation for Global Unity
through non-violence and dharma rakshana

This day is celebrated as ‘ATMARPANA DAY’ on a large scale across all ‘VASAVI TEMPLES’.
The 102 GOTRAJA COUPLES who entered the sacred fire along with Vasavi were pardoned of
their curses of 16 generations and given MOKSHA by VASAVI.
This astonishing news reached Emperor VISHNUVARDHANA who was on his way to
Penugonda and his head broke into thousands of pieces and died.
The sons of the 102 Gotra Couple who entered fire went to KASI to perform last RITES and
brought 102 SHIVALINGAS and installed these SHIVALINGAS at prominent place in Penugonda
city. To this date, this street is known as LINGALA VEEDHI.
Virupaksha was crowned as the King of
Penugonda by Raja Raja Narendra, son of
Vishnuvardhana and provided excellent facilities to the citizens to lead a happy life.

Bharath Ratna Dr. Sarvepalli Radhakrishnan, Past President of India, has indeed very rightly
described Goddess VASAVI as the FIRST ever known embodiment of NON-VIOLENCE in the
world. Her path of non-violence was later tread by Jesus Christ, Goutam Buddha, Mahatma
Gandhi, Satya Sai Baba, Potti Sriramulu of AP and Martin Luther King.
Penugonda the abode of Vasavi, situated in West Godavari District of Andhra Pradesh is well
connected by Road and Rail.

Sri.Vasavi Kanyakaparameshwari is the goddess or kula devatha of the Arya Vysya community as mentioned in the Vasavi Puranamulu written