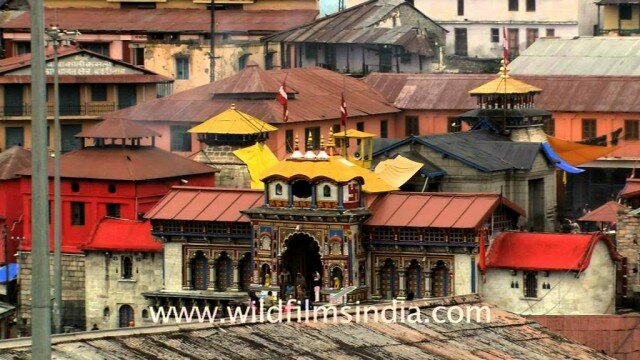 The kapaath or temple door is opened in early May, by the namboodiri of a south Indian temples, to much fanfare.

One can see the peak of Nilkanth right behind the temple, which is situated in the lower Mana valley of Garhwal.

Badrinath temple sometimes called Badrinarayan temple, is situated along the Alaknanda river, in the hill town of Badrinath in Uttarakhand. It is widely considered to be one of the holiest Hindu temples, and is dedicated to god Vishnu. The temple and town are one of the four Char Dham and Chota Char Dham pilgrimage sites. It is also one of the 108 Divya Desams, holy shrines for Vaishnavites. The temple is open only six months every year (between the end of April and the beginning of November), due to extreme weather conditions in the Himalayan region.

This footage is part of the professionally-shot stock footage archive of Wilderness Films India Ltd., the largest collection of imagery from South Asia. The Wilderness Films India collection comprises of thousands of hours of high quality broadcast imagery, mostly shot on HDCAM 1080i High Definition, HDV and Digital Betacam. Write to us for licensing this footage on a broadcast format, for use in your production! We pride ourselves in bringing the best of India and South Asia to the world… wfi @ vsnl.com and [email protected]