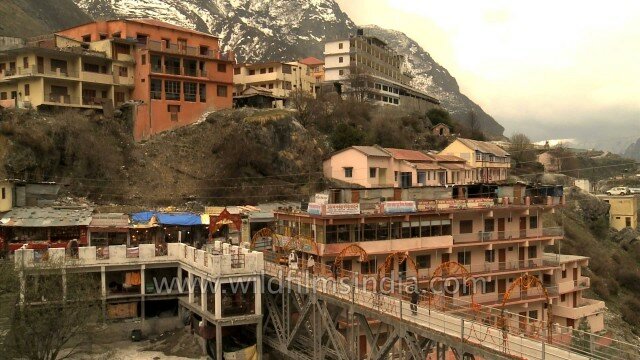 Devotees from all over India visit the holy shrine of Badrinath, Uttarakhand. This bridge connects the true west bank of the Alaknanda river to Badrinath temple.

Badrinath (3,415 metres) is located in the Garhwal hills, on the banks of Alaknanda River.It is a holy town for Hindus in chamoli district of Uttarakhand. It is the most important religious sites among the Chardham. Dwarka, Jagannath Puri, and Rameshwaram are the other three religious sites among the Chardham. The town got its name from the holy temple of Badrinath. Badrinath is situated 301km north of Rishikesh. It is situated in the background of Nilkantha Peak (6560 metres) and between the Nar and Narayana mountain range.

This footage is part of the professionally-shot broadcast stock footage archive of Wilderness Films India Ltd., the largest collection of HD imagery from South Asia. The Wilderness Films India collection comprises of tens of thousands of hours of high quality broadcast imagery, mostly shot on HDCAM / SR 1080i High Definition, Alexa, SR, HDV and XDCAM. Write to us for licensing this footage on a broadcast format, for use in your production! We are happy to be commissioned to film for you or else provide you with broadcast crewing and production solutions across South Asia. We pride ourselves in bringing the best of India and South Asia to the world… Reach us at rupindang @ gmail . com and [email protected]